"Guitry's main assets were his wit and his voice; after much publicised contempt for the cinema, he began filming his own plays in record time and with huge success… Frivolous, misogynist and reactionary, Guitry's films are saved by his humour and his devastating verbal flow, as in the famous seventeen-minute telephone monologue of Faisons un rêve and his voice-over in the brilliant The Story of a Cheat (both 1936)." - Ginette Vincendeau (Encyclopedia of European Cinema, 1995)

Director / Screenwriter / Actor / Producer
(1885-1957) Born February 21, St. Petersburg, Russian Empire
Key Production Country: France
Key Genres: Comedy, Drama, Historical Film, Comedy Drama, Comedy of Manners, Biopic, Historical Epic, Short Film
Key Collaborators: Pauline Carton (Leading Character Actress), Jacqueline Delubac (Leading Actress), Serge Sandberg (Producer), Marguerite Moreno (Leading Character Actress), Adolphe Borchard (Composer), Jean Bachelet (Cinematographer), Myriam Borsoutsky (Editor), Michel Simon (Leading Character Actor), Marguerite Pierry (Leading Character Actress), Jean Françaix (Composer), Raymond Lamy (Editor), Arletty (Leading Character Actress)
“Sacha Guitry was one of France's most popular playwrights, actors and film-makers of the 30s. Son of the famous actor Lucien Guitry, Sacha was born in St. Petersburg in 1885, and grew up in a circle which included the most distinguished actors and celebrities of the period… Thanks to those masterpieces of wit and invention of the late 30s, Guitry's place in the history of the cinema is secure. And it is not fanciful to see in the work of Eric Rohmer a continuation of that oeuvre, though in a more serious vein.” - Richard Roud (Cinema: A Critical Dictionary, 1980)
"The son of actor Lucien Guitry, and a prolific playwright, Sacha Guitry engagingly transferred many of his plays and his own self-indulgent acting to the screen. Unhappy unless author, director, and actor, Guitry is the example of unbridled theatricality that ought to make a fool of himself or cinema but whose films generally work very well. He is still a notable figure in French (or Parisian) culture: a playwright-performer, an example referred to—like Noël Coward… As actor, or sheer presence, Guitry is an unashamedly charming tyrant, a Napoleon by way of Lubitsch." - David Thomson (The New Biographical Dictionary of Film, 2010)

Désiré (1937)
"The famous French comedy actor, author, and producer found in the cinema a device for conserving his own stage plays. Though he took an early interest in the cinema (his first film, Ceux de chex nous, in 1914, was a series of intimate portraits of characters from the artistic world), it was much less of a means of artistic expression than a mirror in which to contemplate himself, an echo through which he could savor his own jokes." - Georges Sadoul (Dictionary of Film Makers, 1972)
“Essentially a man of the theatre, he engaged in film activity as director, screenwriter, and actor, mainly in order to bring his own plays to the screen. His films were typically static affairs, with little camera movement, but nonetheless fluid, charming, and rarely dull. In August of 1944, after the Liberation of Paris, he was arrested and charged with collaboration with the Nazis, but he was later vindicated.” - The Film Encyclopedia, 2012
"Actor/director/producer/writer Guitry was at his best in a series of comedies in the 1930s, but was too often pretentious when dealing with drama or spectacle." - William R. Meyer (The Film Buff's Catalog, 1978)
Selected Filmography
{{row.titlelong}}
GF Greatest Films ranking (★ Top 1000)
T TSPDT R Jonathan Rosenbaum
See Also
Marc Allégret, René Clair, George Cukor, Julien Duvivier, Jacques Feyder, Abel Gance, Ernst Lubitsch, Rouben Mamoulian, Jean Renoir, Alain Resnais, Eric Rohmer, Billy Wilder.
Sacha Guitry / Fan Club
Jacques Lourcelles, Miguel Marías, Jean Dutourd, José Luis Guarner, Jesús Cortés, Bertrand Tavernier.
"Fan Club"
These film critics/filmmakers have, on multiple occasions, selected this director’s work within film ballots/lists that they have submitted. 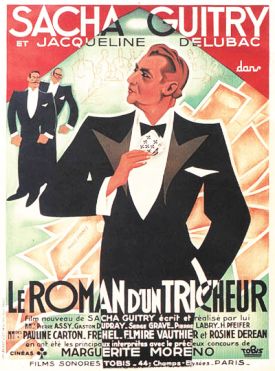